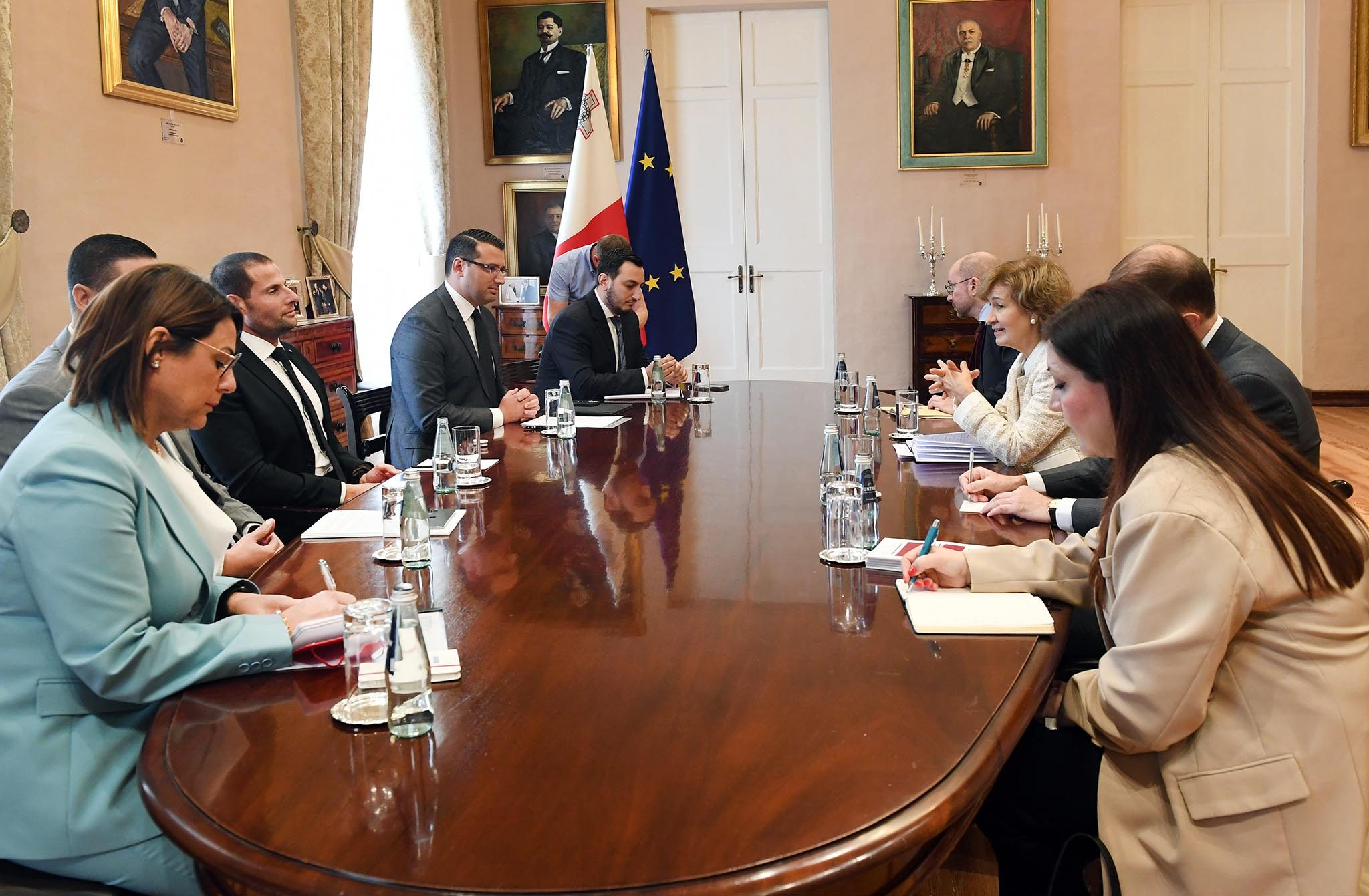 Prime Minister Robert Abela held a meeting with the Organisation for Security and Co-operation in Europe (OSCE) Representative on Freedom of the Media, Teresa Ribeiro, at his office. During the meeting, Prime Minister Robert Abela underlined a number of reforms undertaken in the past two years to strengthen the institutional framework, governance, and the media sector. These reforms were implemented in parallel to other global challenges.

Prime Minister Robert Abela outlined the presentation of the three draft laws that offer the highest level of protection to journalists and the media sector overall ever given in Malta’s history. He added that a committee of media experts was appointed following the acceptance of the recommendations of the public inquiry into the assassination of Daphne Caruana Galizia. The committee is chaired by Judge Emeritus Michael Mallia, who also led the public inquiry. Prime Minister Robert Abela referred to the agreement reached with the Caruana Galizia family and the Institute of Maltese Journalists (IGM) on the composition and terms of reference of the committee of experts.

The prime minister explained that following the recommendations by the committee, three draft laws were laid on the Table of the House of Representatives that will lead to an increase in the protection given to journalists. In fact, 87% of the committee’s recommendations were included in the media reform. The prime minister also underlined how Malta is introducing anti-SLAPP provisions in Maltese law, a first in the European Union.

Further to the above, the sentences for crimes committed against journalists will be more severe. During the meeting, it was made clear that, in the spirit of cooperation, there is no objection to further consultation on the draft laws, which are at the first reading stage. Prime Minister Robert Abela said the government is committed to continuing to implement reforms, as freedom of expression and the role of the media are two important pillars in a democratic society.

The prime minister praised the work carried out by the OSCE on media freedom, while Teresa Ribeiro thanked Prime Minister Abela and the Maltese Government for an open dialogue with the organisation she represents. She also took note of the work undertaken to further strengthen media freedom. Minister for Foreign and European Affairs and Trade Ian Borg, Minister for Justice Jonathan Attard, the Permanent Representative of Malta to the OSCE Natasha Meli Daudey and Head of the Secretariat of the Office of the Prime Minister Glenn Micallef were present for the meeting.​ 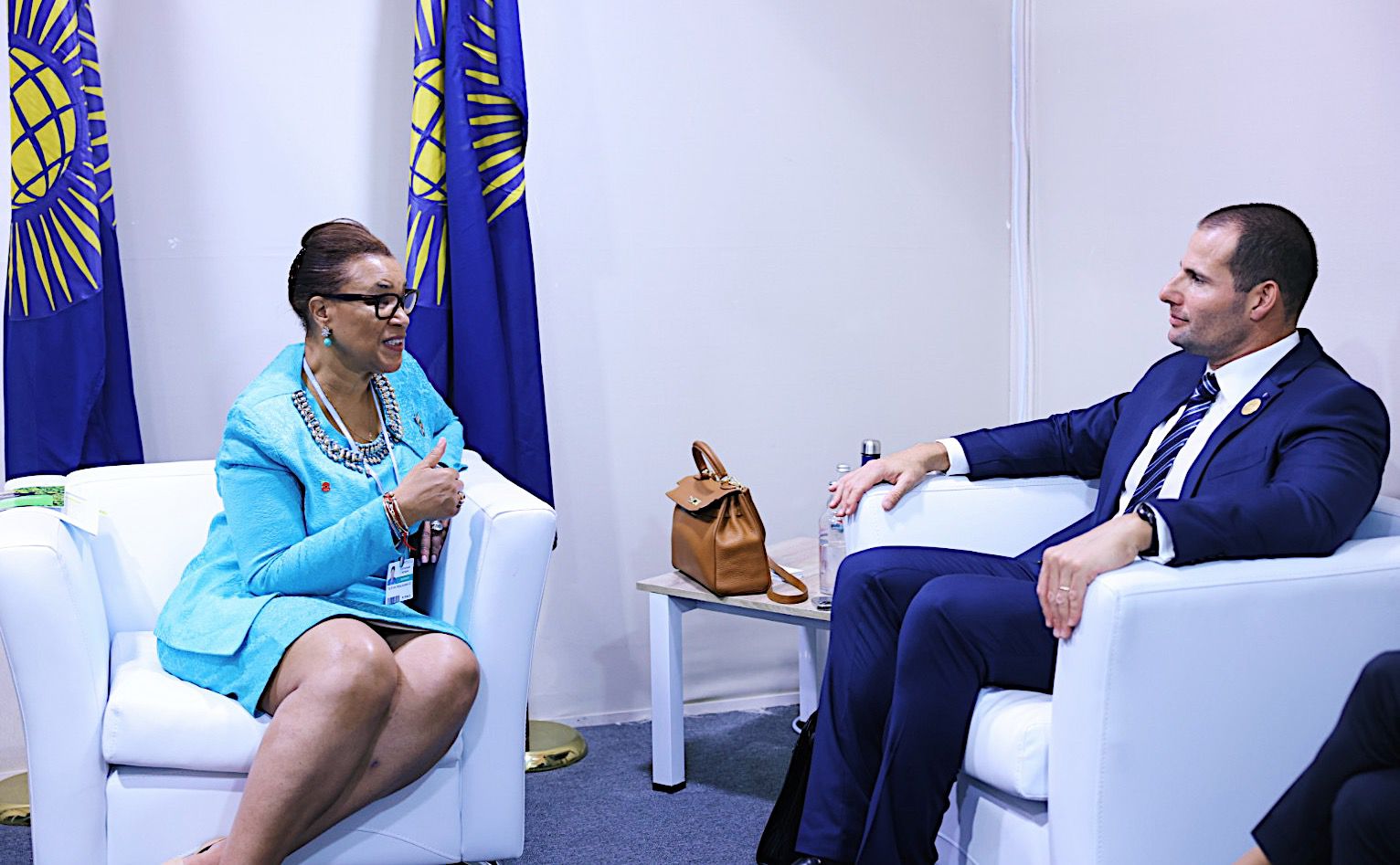 In the margins of the COP27 meeting in Sharm El-Sheikh, Prime Minister Robert Abela held a bilateral meeting with the Commonwealth Secretary-General Patricia Scotland.

Prime Minister Robert Abela said Malta is honoured to serve within this Group and will be playing an active role in ensuring that democratic principles, human rights, and rule of law are upheld.

On climate change, the Prime Minister reiterated that Malta will continue supporting Small Island Development States in their efforts to combat climate change.

In this regard, the government’s aim is to continue to share best practices.

The Prime Minister also outlined how the Commonwealth offers an important platform for small island states in the fight against climate change, especially small states that have unique vulnerabilities and challenges requiring more tailored solutions.

During the meeting, the passing away of HM Queen Elizabeth II and her role in strengthening the Commonwealth was also touched upon.

The Prime Minister highlighted the late Queen’s relationship with Malta, noting that her last official visit was to the islands in 2015. This can be done by means of robust policies that incentivise investment in the digital economy together with policies that encourage greater use of alternative energy.

During his address to the United Nations meeting on climate change, attended by numerous world leaders, the prime minister announced that just like last year in Glasgow, Malta will be doubling its contribution to the International Climate Fund.

Dr Abela added that Malta is implementing its decarbonisation strategy which will lead to carbon neutrality by 2050.

Prime Minister Abela explained that this year, the Maltese Government has also focused on a structured stakeholder dialogue with the private sector, and this has generated a crucial momentum to drive the green and just transition.

The prime minister outlined Malta’s presence at COP year after year is a manifestation of the country’s commitment to the Paris Agreement, as well as our resolve to keep the 1.5-degree target alive.

Furthermore, Malta is committed to the EU’s ambitious Fit for 55 package, aimed at reducing emissions to thus mitigate global warming.

Dr Robert Abela said that we must go beyond statements of goodwill, as only actions will deliver results that safeguard our environment, and this must be done with commitment and ambition.

Prime Minister Robert Abela stated that this phenomenon is impacting every corner of the world, yet small island states are particularly vulnerable to the effects of climate change despite being the ones that have least contributed to the release of carbon over the years.

The prime minister said that going forward, the future should be based on the equality of nations, without disparity, and added that Malta is probably best placed to serve as a test bed for new technologies that can make a difference.

He also added that Malta will be offering scholarships to students from these islands, to undertake climate related studies at the University of Malta.

Furthermore, Malta is supporting other countries in their decarbonisation efforts, and recently sent medical assistance to Pakistan following the devastating floods as part of our support to countries experiencing climate-related disasters.

The prime minister said that the sea level rises caused by climate change should not affect any rights which islands and coastal nations currently have over their land and maritime jurisdiction.

Dr Abela concluded that the green revolution will lead to shared benefits including affordable clean energy, healthy air, and enough food for all.

This transition must be delivered for our people and our future.

Earlier on, the prime minister also addressed a high-level meeting on water security where he shared Malta’s best practice in water sustainability. 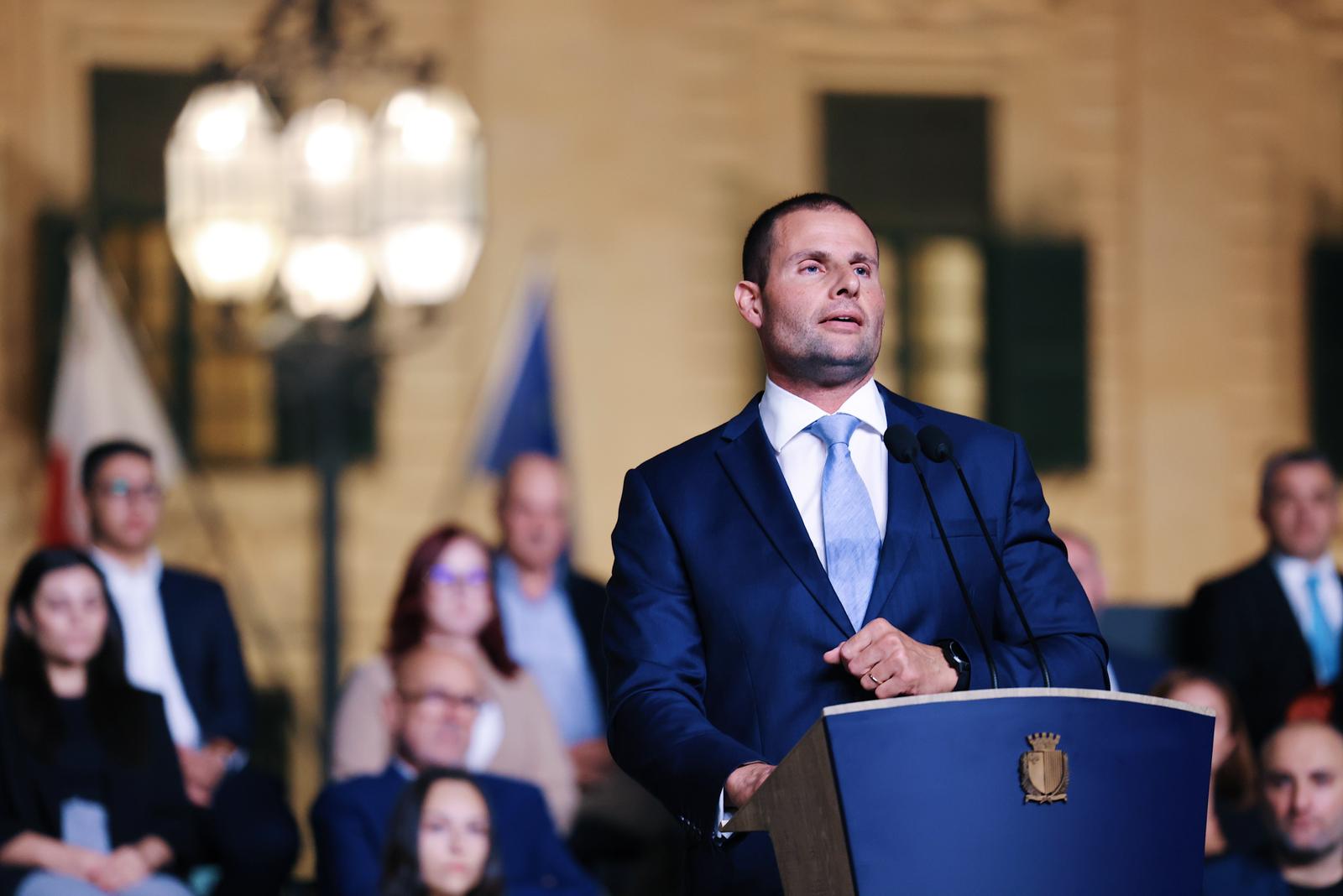 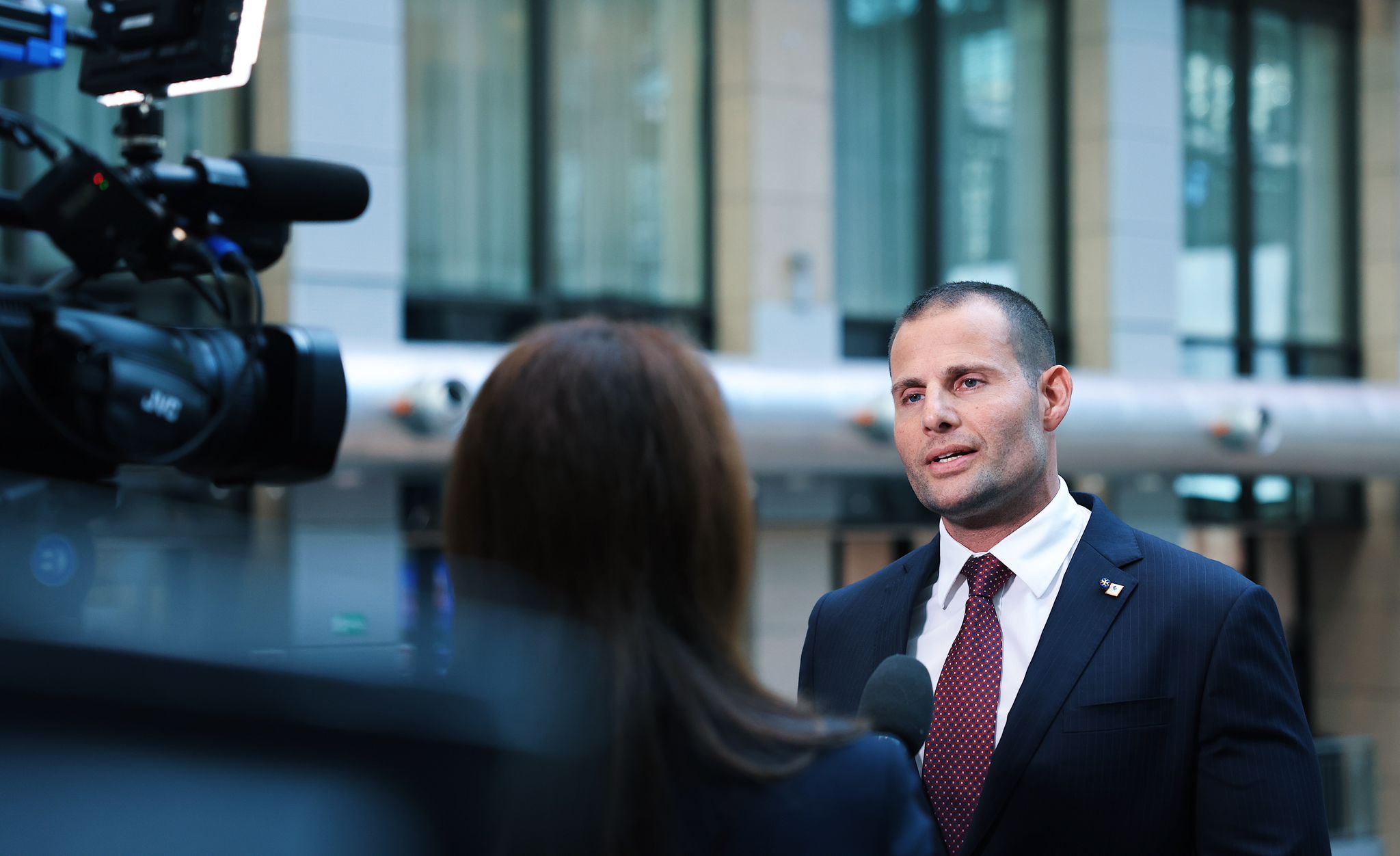 Following intense negotiations at the European Council, which Prime Minister Robert Abela attended, European leaders agreed on a joint gas purchase as well as a strategy to mitigate the rise in gas and energy prices. These were among the key conclusions of the European Council held in Brussels on Thursday and Friday.

Following the communique published earlier this week and the relevant legislative proposal, work on the joint purchasing of gas between the 27 member states will be intensified in the coming days. At the end of this meeting, Prime Minister Robert Abela said that this agreement could also help Malta in shouldering the burden of assistance given by the Maltese Government to protect the livelihoods of our citizens and provide stability for our businesses.

Although Malta is covered by a contract that ensures the security of our energy supply, the framework for the joint purchasing of gas could help reduce energy prices globally, including the energy imported from the interconnector between Malta and Italy. Thus, Malta stands to gain from the agreement reached.

Dr Abela added that Maltese and Gozitan families will continue to enjoy economic and social stability due to the unchanging local energy prices as a result of the government’s support, which, this year, will reach €1 billion. The Prime Minister also noted that this strategy, as reflected in the conclusions of the European Council, encourages support for families and businesses on a European level and thus attests to the bold and decisive action taken by the Maltese Government in this area.

Prime Minister Robert Abela said that this milestone achievement reached by the European Council is a step in the right direction. Throughout the discussions, he called on the European Commission to continue monitoring gas and energy prices closely and, when necessary, propose action to mitigate an increase in prices. The Government of Malta also welcomes the strategy adopted, as reflected in the European Commission’s communique, as it will add flexibility to the use and implementation of EU funds. Through this flexibility, EU Cohesion Funds can be used for support in the energy sector.

Furthermore, considerations are being made to increase flexibility in the Temporary Crisis Framework for State Aid, which would allow member states to provide aid through support schemes to private entities in various sectors, including transport and energy, up to a maximum of approximately €750,000 until the end of 2023. The European Council also discussed the possibility of simplifying the framework on permits for renewable energy projects, and Dr Abela said that through this, Malta could benefit greatly and quicken the process to achieve its decarbonisation objectives. Dr Abela referred to the European Commission’s commitment to supporting investment in renewable energy and supporting competitiveness in the EU and Malta. The conclusions also highlighted the need for investment in technologies that improve the efficiency of energy use.

Other thematic issues, including economic affairs, were also addressed during the European Council. Prime Minister Robert Abela stated that a social policy safeguarding families and businesses must be implemented at both a national and EU level. When discussing external affairs, European leaders reiterated their support for Ukraine, discussed EU-China relations, and looked forward to the UN Conference on Climate Change, COP27. Prime Minister Abela outlined the importance that at COP27, leaders must honour the Paris Agreement and the Glasgow Climate Pact to continue combatting climate change with long-term measures.